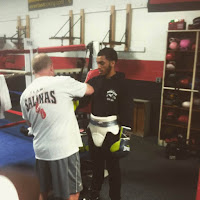 The details are currently in the works and will be released soon according to Salinas' trainer, Jack Loew via Facebook.

This will be the first match for Salinas, who has won six straight matches, since he defeated Duarn Vue by decision at The Cannery in Las Vegas live on Fox Sports 1 in September.

Salinas, a super featherweight who recently celebrated his 23rd birthday, holds a record of 9-1 with 8 of his victories coming by way of knockout.

Early speculation is the bout will be held in the Mahoning Valley, which Salinas holds a 6-0 record when fighting on his home turf.

Stay tuned for more details as they become available.


Posted by Youngstown Boxing at 3:43 PM