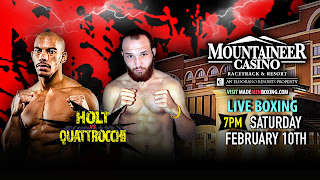 Media Release:
Two of the Ohio Valleys best Super Middleweights are set to square off at Mountaineer Casino Saturday, February 10th.  Undefeated rising star Joey “The Hitman” Holt (9-0, 7KO) of East Liverpool, is set to battle 2 time WV State Champion, Aaron “Quiet Storm” Quattrocchi (10-2, 5KO) in a highly anticipated Super Middleweight Title fight. The fight is the Main event of Cupid’s Knockouts 2018, taking place in the renown casino’s speakeasy ballroom.  Holt, a winner by KO in 7 of his 9 fights,  looks to give the former 2 time State champion his first career loss, in the division. The fight is scheduled for 8 rounds and is for the vacant Super Middleweight WV State title. 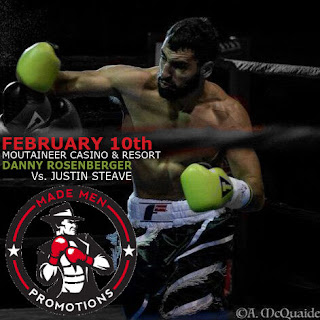 Also featured on the card; Weirton’s own boxing star, Justin “The Hawk” Steave (7-1, 4KO).  The heavy-handed Junior Middleweight will take on Youngstown veteran, Danny Rosenberg in a 4-round contest at 154lbs.

The event welcomes all ages, attendee’s under 18 must be accompanied by an adult.  Doors will open at 5:00pm with the first bell being at 7:00pm. Tickets can be purchased at www.mademenboxing.com. 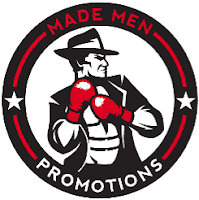 Any fighter in association with Made Men Promotions will have the opportunity to fight in the Tri-Sate area with much more frequency than the competition. Hence, expediting the fighter's career to the next level.

Made Men Promotions also has a wide range of marketing advantages and opportunities for its fighters. Including but not limited to individual promotion, sponsorship opportunities, and branding.

Youngstown Boxing News would once again like to thank Angelo Magnone of Made Men Promotions for media credentials to cover this event.  Angelo has been great to our website and to the sport of boxing putting on great events at Mountaineer and Rivers Casino in Pittsburgh.
Posted by Youngstown Boxing at 7:32 AM