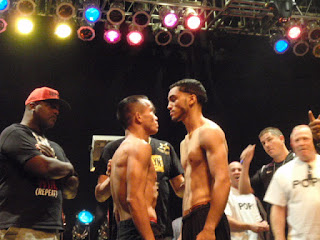 Alejandro "Popo" Salinas will be taking the biggest steps of his career when he makes his ring walk tomorrow night at The Cannery located in Northern Las Vegas as he looks to pick up the biggest win of his young career.

The first victory for Salinas in preparation for this bout came on the scales on Monday night at The Cannery as Salinas made weight with ease weighing in at 129.4 pounds.

Now that Salinas knows his weight is good he can turn his attention to the real mission at hand.

Salinas, 22, will be taking on undefeated prospect Duarn Vue of Madison, Wisconsin in a match that will be nationally televised on Fox Sports 1, a match that can propel Salinas into more and bigger television dates.

Vue, 31, who will bring a 12-0-2 record into the ring against Salinas last fought in April when he scored a unanimous decision over Miguel Mendoza.

This will be a solid step up in competition for Salinas who has won his last five fights including a stoppage of Jairo Vargas his last time in the ring in June at the Palermo Center in Campbell, Ohio.

Unfortunately for Salinas, this fight will not be in his backyard, as traveling has not been kind to him.

The last time Salinas, whose record sits at 8-1 with 8 KO's, left the Youngstown area or its surrounding 90-minute radius, he picked up his lone loss to Oscar Duarte when he traveled to Las Angelas in the September of 2015.

Vue, who trains and resides in Madison, Wisconsin, is known more for his relentless pressure and fighting forward than his punching power.

Like Salinas, the 5'3"  Vue has not traveled often or far and will be leaving the Wisconsin-Minnesota region for the first time in his career.

Originally from Thailand, Vue's family fled for the United States and settled in the small town of Sheboygan, Wisconsin.

Vue had a decent amateur career as a self-trained fighter while living in Sheboygan but living in a small town limited his growth in the sport.

Having given up on boxing because of a lack of trainer to fix his flaws in his small town, Vue saw his weight balloon to about 180 before he made his way to Madison and into the doors of Supreme Hits Boxing Gym where he has become one of the top-ranked Super Featherweights in American under trainer Murid Muhammad

The main event of the televised card from The Cannery will feature two undefeated fighters as Ledaun Barthelemy (13-0) takes on Eduardo Ramirez (20-0-2) in a super featherweight showdown.

Posted by Youngstown Boxing at 7:44 PM