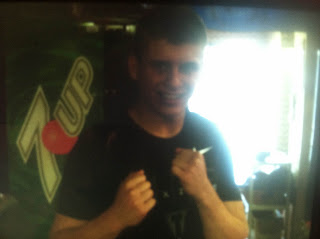 Some say everything happens for a reason.  If that saying is true, then Drew Smith, 18, of Hanoverton, Ohio suffered an injury playing football that kept him out of basketball and all other sports for a reason.

When Smith suffered the injury which would keep him sidelined from all sports for a decent amount of time, his father thought it might be in his best interest to try boxing to help get back in shape for football, a decision that ultimately would keep Smith between the ropes and away from the gridiron.

Smith first stepped foot into Salem Boxing Club at age 13 and has not turned away from the sport despite continuing his academic career at Youngstown State University majoring in political science.

With his move to Youngstown, Smith decided that a change to a closer and more convenient boxing gyms would be in his best interest and has since made the move to Burnside Boxing in Struthers.

Listen to the interview below to learn more about this promising and talented boxer.

Posted by Youngstown Boxing at 4:38 PM