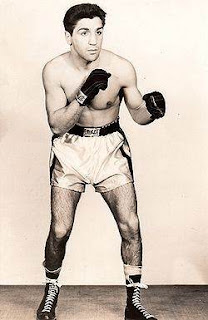 On July 20, 1945, a relationship was formed like no other in the sport of boxing.  This was not a relationship between a fighter and a trainer but a special bond between a man and the mecca of sports arenas, Madison Square Garden.

Joey Carkido stepped into the ring at The Garden that day for the first time as the Youngstown welterweight disposed of Marcus McCray in his first of many fights at the historic arena.

The story of Carkido begins a long way from the bright lights of New York City when as a 14-year-old he began his amateur boxing career using his brother's identification.

Carkido would put together a 27-3 amateur record while winning two Youngstown Golden Glove titles and finishing runner up twice in the Cleveland Golden Gloves under the direction of trainer Carmen Chicklo.

After two years of boxing at the amateur level, Carkido once again used his brother's identification and made the move to New York City to turn pro in 1945 at the age of 16.

Carkido would fight over 100 pro fights in his career that spanned eight years and would become known for his toughness and grit and was commonly dodged by opponents despite lacking the speed to capture a world title.

During the years 1946 and 1947 Carkido had a fine run defeating Ray Salas, Jimmy Warren, and Davey Cohen, three fighters who were supposed to make easy work of the Youngstown native.

The defining victory for Carkido came on April 3, 1950, in Hartford, Connecticut when he defeated former world champion Beau Jack by a unanimous decision.

Carkido, who fought a record 17 times in his career at Madison Square Garden took the fight anybody at any time approach and took on greats such as Charlie Fusari, Paddy DeMarco, Johny Saxton and Lew Jenkins.

Returning home to Youngstown following his career which finished with a 59-32-7 record, Carkido would work construction but also stay active in the sport he loved training fighters for 30 years including Tommy Kristian who finished with a 5-5-2 pro career.

Carkido would battle Parkinson's Disease for many years before sucomming to the disease in 2004 at the age of 75.

Though Carkido might not be mentioned in the same breath as Kelly Pavlik, Ray Mancini, Jeff Lampkin, Greg Richardson and Harry Arroyo, it was the hard work of fighters like Carkido who laid the foundation for Youngstown's future champions.

Posted by Youngstown Boxing at 1:28 PM