Salinas-Vargas Ready To Get It On 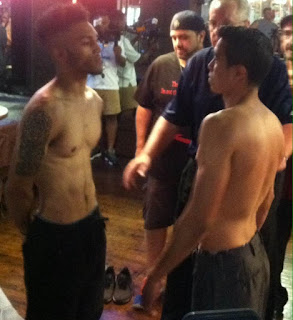 There will be no love lost between Alejandro "PoPo" Salinas and Jairo Vargas when they enter the ring Friday night at The Palermo Center in the evening's main event.

Vargas, 29, who has split his last four fights confirmed the rumors that were swirling that he wanted this fight as he feels Salinas will prove to be no contest for him.

During Thursday night's weigh-in at East Side Civics which saw both fighters weigh in at 131 pounds, it became apparent that Vargas (6-2, 5 KOs) wasn't coming to another fighters backyard to be a pushover as he jawed off to Salinas during the face off.

"I do not care if I'm fighting in is hometown.  We can fight anywhere and the outcome will be the same, I will come out victorious" Vargas stated to us following the weigh-in.  "I'm feeling great, I'm feeling very confident.  Training camp went great." Vargas continued "Yes PoPo Salinas is a great fighter but I am better."

Salinas, 22, who will step into the ring with a 7-1 record with all his victories coming by way of knockout is known for his humble personality and took the high road during the face off and opted to extend his hand out and shake his opponent's hand rather than get into verbal warfare.

"I'm just ready for tomorrow, I'm just ready to pound this kid's face in and stop all the cockiness he has in him," Salinas said.  "All I want to do is impress my family, my fans, and my team".

Also fighting on the card will be heavyweight prospect Jermaine Franklin who will be fighting in Youngstown for the second time in his young pro career.

Franklin (10-0, 9 KOs) of Saginaw, Michigan scored a knockout victory over Youngstown native Wes Triplett back in March of 2016 at the Ukrainian Hall located on Youngstown's west side.  The 23-year-old who possesses a National Golden Gloves title which he won in 2014 on his resume will be taking on 34-year-old Danny Calhoun (6-2, 3 KOs) of Chicago in the co-main event that is scheduled for six rounds.

A pair of four-round bouts scheduled at the 160-pound weight limit will round out the pro fights slated for the evening as Ohio native Jose Rodgriguez Jr., 22, will put his perfect 3-0, 3 KOs record on the line against 27-year-old Lavelle Hadley who holds a 2-3 record with both victories coming via the knockout.  The other 160-pound fight slated for the evening will match 25-year-old  Quwanda Williams who sports a 0-1 record against Mark Weissman who will be making his pro debut.

Doors for the event being held at the St. Lucy's Palermo Center located at 394 Tenney Avenue in Campbell will open at 6:00 PM with the first bout beginning at 7:30 PM.


Posted by Youngstown Boxing at 3:13 PM