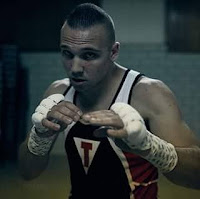 We caught up with Struthers, Ohio amateur Mike Sullivan recently. Sullivan, 21 who fights at 162 pounds won the High School KO Drugs Boxing Tournament twice while being named the most promising boxer both times.

As an amateur, Sullivan (3-1) has shown the ability to end a fight quickly with his power but admits he is still a student of the sport and does not mind fighting more rounds for the experience.


Sullivan who trains at Burnside Boxing in Struthers last stepped in the ring this past Saturday against Joshua Perkins of Akron.  Sullivan was dominating Perkins before the rain interrupted the outdoor fight at the Ukrainian Hall and forced it to be ruled a no contest by the USA Boxing officials.


In May Sullivan scored a second round knockout victory over Torri Hawkins in what was his last official bout.

Sullivan will be back in action on August 5th at the St. Lucy's Palermo Center in Campbell as part of the All-Star Boxing Show II.


Posted by Youngstown Boxing at 3:59 PM